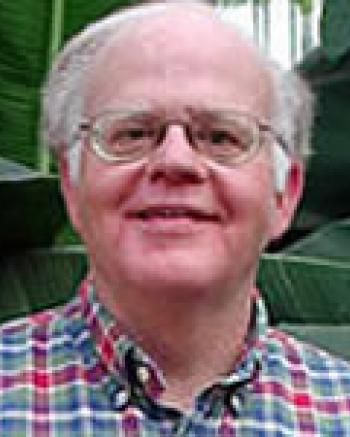 As a railroad buff, John's childhood dreams probably were to be an engineer on a mainliner or maybe even a hobo. But life sidetracked him into academia. After graduation from California, Hill became a post-doctorate at Iowa State in Richard Fords’ laboratory in 1971 and was added to the faculty when Ford left for Illinois in 1972. Hill broadened the virology program beyond the more traditional one of Ford, concentrating on monoclonal antibodies, and he has gained an international reputation in the field. Hill was involved in the MIAC Morocco project. In cooperation with D.P. Durand in microbiology, Hill built a solid program in interdisciplinary virology. Major interests are the molecular basis of virus disease resistance, development of strategies for detection and identification of viruses, the basis for virus-vector specificity, and the epidemiology and control of soybean mosaic virus. He was made a Fellow in the American Phytopathological Society in 1992.